Five airports have been selected by the Federal Aviation Administration (FAA) to analyze systems and technologies that could detect and mitigate any potential safety concerns posed by unmanned aircrafts. This research is part of the FAA’s Airport Unmanned Aircraft Systems Detection and Mitigation Research Program.

Syracuse Hancock International Airport (SYR) was selected from one of three remaining spots under extensive criteria, by meeting strict requirements for operating environment conditions and other size requirements.

The FAA Reauthorization Act of 2018 requires the agency to ensure that technologies used do not interfere with safe airport operations. At least 10 new technologies are planned to be tested at these airports. Research will be starting later this year and will span over the next 24 months on a rotational basis.

The program will create standards and guidelines for future drone detection and mitigation technology for airports around the world. Research conducted will lead to implementation of new technologies that ultimately will lead to safer airports for both passengers and manned aircraft.

“We would like to express our sincere gratitude to our elected and appointed officials, local UAS community, Central New York business community, local military partners, and federal partners for their extraordinary support during this arduous application process,” said SYR Executive Director Jason Terreri. “We fully expect UAS technology to become an even larger part of our everyday lives. Selection for the research program will position SYR at the forefront of UAS operations, and we believe this can only mean great things for future UAS-related opportunities in Central New York.”

“The FAA’s selection of Hancock International Airport to do this important work further solidifies Central New York’s decade-long leadership in helping the federal government integrate UAS into the national airspace,” said U.S. Senator Charles E. Schumer. “Safely integrating UAS into the national airspace has enormous economic and national security potential for the United States. This FAA selection proves that there is no better place in the country to harness that potential than right here in Central New York.”

Please reach out to Empire Drone for any of your UAS needs. 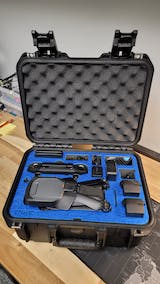